MOYA – Ivan Mazuze
The Mozambican language Xichangana has a word, ‘Moya’ that translates as ‘spirit/soul’. And this album, rich with melodic and rhythmic delights that have been lovingly selected and sculpted from African and Indian traditional music, is in an all-embracing way, soul music.
Ivan Mazuze is a performer, a composer, an academic and a traveller who has found home in Norway. He is inspired by cultural differences and has immersed himself in studying the links that connect traditional music to contemporary music. The choice of instruments ranges from sax, piano, guitar and bass to tablas, kora, and calabash. The material on the album explores the religious music used in practices during the spiritual possession trance ritual called Xikwembu.

The opening track is Rohingya. The track although rhythmically relaxed has a meditative and reflective feel to it and was inspired by the Rohingya people of Myanmar who were displaced from their homeland in 2017.

Mantra is a fascinating take on a custom common amongst some important religious African practices. A mantra is a sacred utterance, a group of sounds or words believed to have psychological and spiritual powers. The track combines a rapid-fire mantra with compelling instrumental interplay and superb soprano sax soloing from Ivan.

Masessa is historically, a surname evolved as a way to sort people into groups – by occupation, place of origin, parentage and even physical characteristics. The track opens percussively leading to a stimulating thematic statement and so to dexterous solos from pianist Olga Konkova and Ivan.

Ivan: “Moya means soul, wind and a connection in a spiritual context, which for me simply means in search of musical souls.”

Probing piano and sax wind their way through an enthralling and enchanting track, which might be considered as the album’s centrepiece.

Lunde was inspired by traditional Norwegian folk music and relates specifically to the Telemark region where Ivan spends a great deal of self-reflective time in the area’s abundant natural beauty. The track includes a tremendous guitar solo by guitarist, Bjørn Vidar Solli.

Wemba Wa was inspired by the late Congolese pop artist Papa Wemba who enjoyed an international reputation in world music. Wemba has meant a great deal to Ivan’s own musical understanding, research and development.

Ivan: “Nchisi was inspired by the landscape and the people of the Nchisi district of Malawi.”

The track offers a delightful combination of sax, kora as played by Ibou Cissokho and percussion provided by Ivan’s handclaps.

“The West African Griot is a troubadour, the counterpart of the medieval European minstrel. The griot knows everything that is going on, he is a living archive of the people’s traditions. The virtuoso talents of the griots command universal admiration.” (Francis Bebey, ‘African Music, A Peoples’ Art’).

Asante is a Swahili word for ‘thank you’. The track features the virtuosic talents of bassist Per Mathisen, Ivan on soprano sax and Solli’s guitar. As throughout the album, drummer Raciel Torres is sensational. It is, in its entirety, a vigorous tour de force!

The Baobab tree is known as ‘the tree of life’. It can provide shelter, clothing, food and water for the human and animal inhabitants of the African savannah regions. The track includes an evocative vocal/instrumental theme, an ultra-jazzy piano solo, a nimble-fingered acoustic bass solo and a concluding solo from maestro Mazuze.

Khuloiya means ‘ancestors’ in the Xichangana language of Mozambique. Ivan: “The track is dedicated to my late friend, a bass player called ‘Filipinho’ who actually named the song when I composed it about 15 years ago.” The track serves as a vehicle for spectacular solos from Ivan and Bjørn Vidar.

This is truly captivating music. It is a blend of old and new, a merge of east and west, a mix of style and substance. We say ‘asante’ to Ivan Mazuze and his chosen ‘tribe’ for a musical experiment that succeeds in every way. 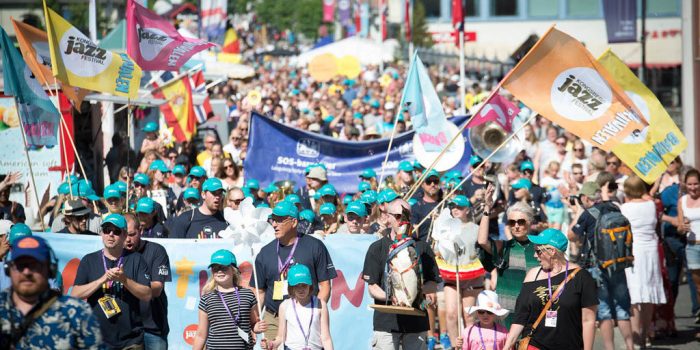